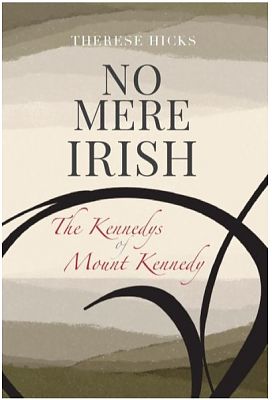 No Mere Irish: The Kennedys of Mount Kennedy – Therese Hicks

Therese Hicks, author of ‘No Mere Irish’ a new biography on the Kennedys of Newtown Mount Kennedy, will visit on Saturday 26th November @ 4.30pm. A signed copy of this local interest title is the perfect Christmas Gift

The seventeenth century in Ireland was a time of huge change. At its beginning, there were still significant areas under Catholic Gaelic ownership and cultural sway; by the end – almost none. This Kennedy family provides us with a window into a turbulent century from the point of view of people who lived there. They were one of the few Gaelic lines who embraced Protestantism. This accelerated their rise to power and improved their social standing. Yet despite their adroit manoeuvring, the instability of the times eventually led to their undoing. This book will be of interest not only to those who live in Newtownmountkennedy and the surrounding communities in Co Wicklow, but also to Dubliners, as a major part of their story is set in this city. It is a book for anyone who is interested in Irish history, especially when told from a family’s own experience.

Join Waitlist We will inform you when the product arrives in stock. Please leave your valid email address below.